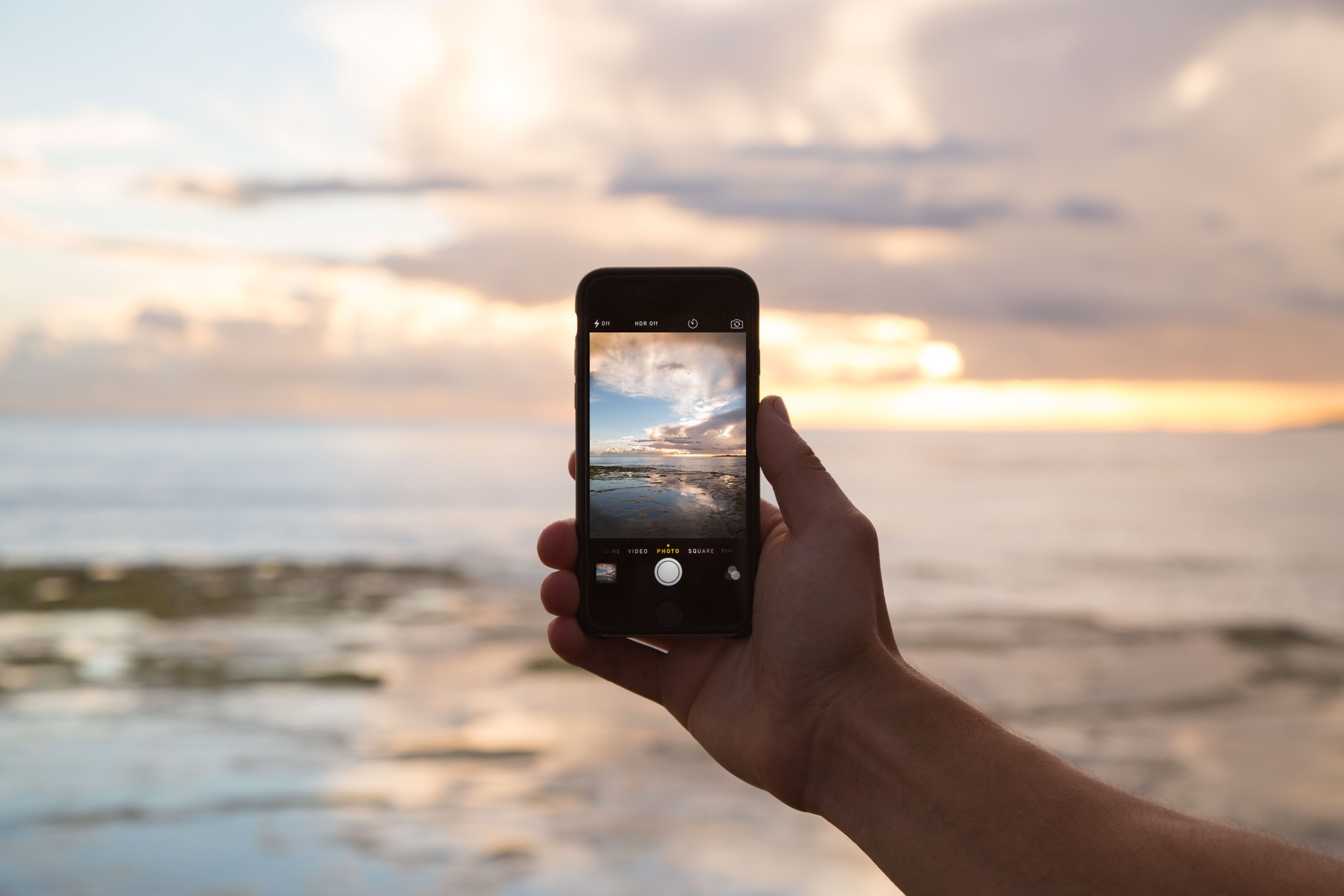 This was my submission for my data journalism class.

When was the last time you looked at your smartphone when there wasn’t even an update?

We are trapped in a world of blinking lights, ‘blue ticks (Read’/’Seen’), a there’s an app for that mentality and information overload (both useful and entertaining) from ‘friends’ (did you see they just posted a story?). Smartphones have become cheap – there are more smartphones in India than the United States – and the rise of the digital economy and improved user design has made them an inescapable part of our lives.

No bacteria, animal or virus is responsible for this upcoming epidemic. We brought ourselves here.

While the Diagnostic and Statistical Manual of Mental Disorders did not list Internet addiction as a serious concern in 2013, the World Health Organisation said in a meeting in Tokyo a year later that “attention deficit hyperactivity disorder (ADHD) and particularly major depression” (pg 11) was common among internet addicts (especially among young adults in Asia).

The black mirrors in our pockets leading us to the internet influence elections. On a daily basis, I feel they also affect our mental well-being.

“We don’t make the distinction between 150 calm, deep breath, conscious choices and then 150 anxiety-driven reactions,” Tristan Harris, a notable critic of addictive tech and the founder of the Center for Humane Technology, recently said in a Vox interview.

Six entries from my data set

(Within a minute, I opened five different apps, mostly checking to see if there are any updates while having lunch with a friend who was busy reading a message of her own)

Over one week, I decided to see if I really made over 150 anxious decisions daily so I analysed my own dependence on my One Plus 3T. I collected 1,918 data points using the app Quality Time noting down the time and duration of every app that I used that week.

The results confirmed what I feared and always knew: I am a smartphone addict. 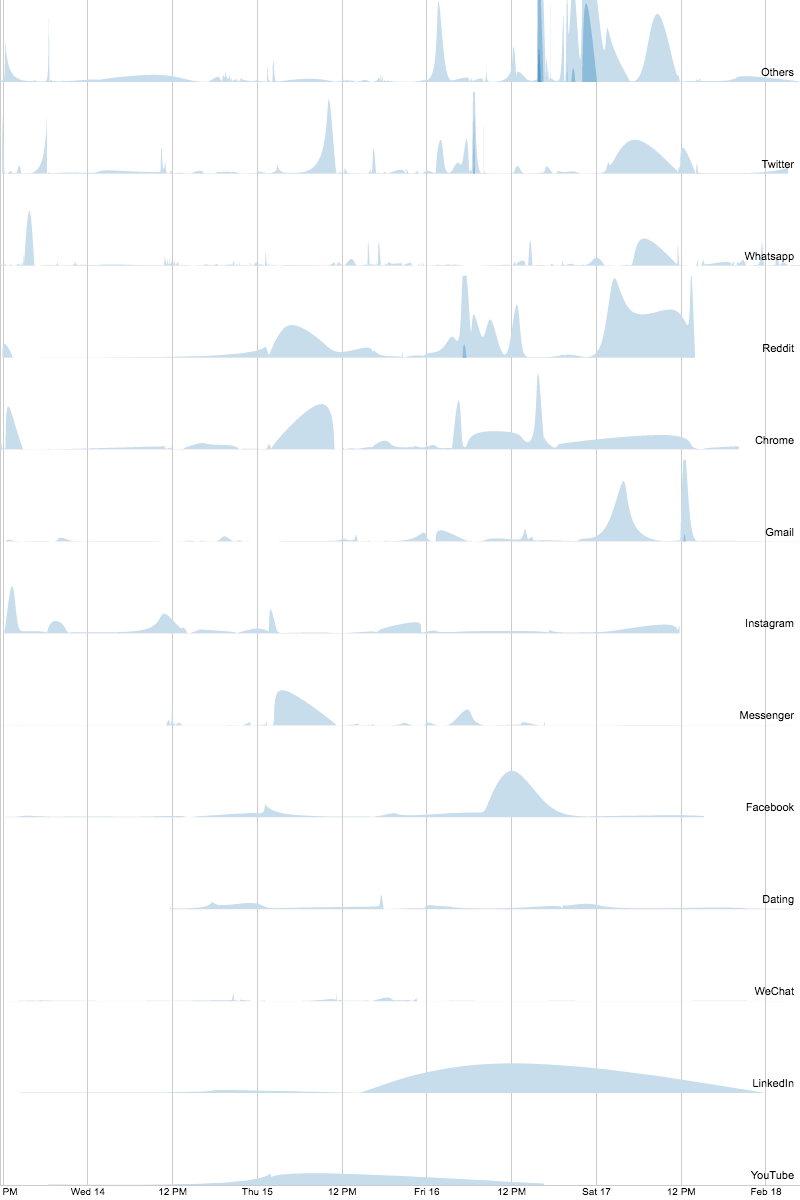 The graph you see above is a horizon graph. The taller mountains point out moments when I spent a lot of time and the apps on which I spent the most time are at the top.

If a mountain is particularly dark and thin then think of it as being particularly heavy signifying the more intense my use of the smartphone.

But that’s not really the source of my addiction. What I find more interesting is the scarcity of blank sections – a majority of the time awake was spent on some app or the other on my smartphone.

The spikes or the darkest sections were actually when I was productive. I was either listening to podcasts while doing weekly chores (1h42m), reading articles on Twitter (1h7m), reading academic literature (32m) or browsing threads on Reddit (39m).

Instead, what gets you hooked is the minuscule but frequent use of messaging and social media apps – you want to reply, check tweets, snaps, instagram photos or Facebook updates for micro-periods (less than five seconds).

And those small actions add up. Over 52.2% of the 41+ hours I spent on my phone (nearly a full-time job) went towards these apps.

Sometimes, you even do it unconsciously. As the graph shows above, I often checked Whatsapp while shuttling between apps. It had become a habit. Messenger and Whatsapp accounted for 200 of the 335 one-second app uses that week.

So what’s rehab for smartphone addiction?

Even though it may be a software/internet problem, I believe a significant trigger was an improvement in hardware. Uninstalling non-essential apps (games, dating apps) made little difference but removing the fingerprint scan unlock function helped.

On Saturday, I disabled all my notifications but it was the ease with which I could unlock my phone that kept me coming back for more. A decade back, I remember physically struggling with the tiny menu button I needed to press to unlock my Nokia 6620 in south Thailand.

I naturally expected a drop over the weekend due to personal engagements but what effectively locked me out of my phone on Sunday was a complex password. I created a password that was 17 characters long (the maximum length) and it was a combination of letters, numbers & symbols and the inconvenience of typing so much stopped me altogether.

But I think I might have to keep changing it as I get familiar with the password. Old habits die hard.

You might not have the same impulse control issues that I do (I have always had no unread emails in my inbox) but if it bothers you how much time you spend on your smartphone then you might need to take similar steps.

It almost feels like a game between me and the technology industry. Every few months, I take steps to push them back as they try to find new ways to entrance me ensuring the hours of my life slip away in a miasma of taps, swipes, clicks and notifications.

Of course, I have great appreciation for my smartphone but it still feels alienating how technology has subtly influenced my behaviour.

I wonder what life would have been like if I had all those hours back. Would I be happier? Would I have more control over my life? Would I meet friends more frequently?

I guess I now get to find out.

Did you like the article? Do you have any comments? Please feel free to reach out to me on Twitter and do share this article with other people as it would help me greatly in my job search. Thanks!