Home In A Backpack 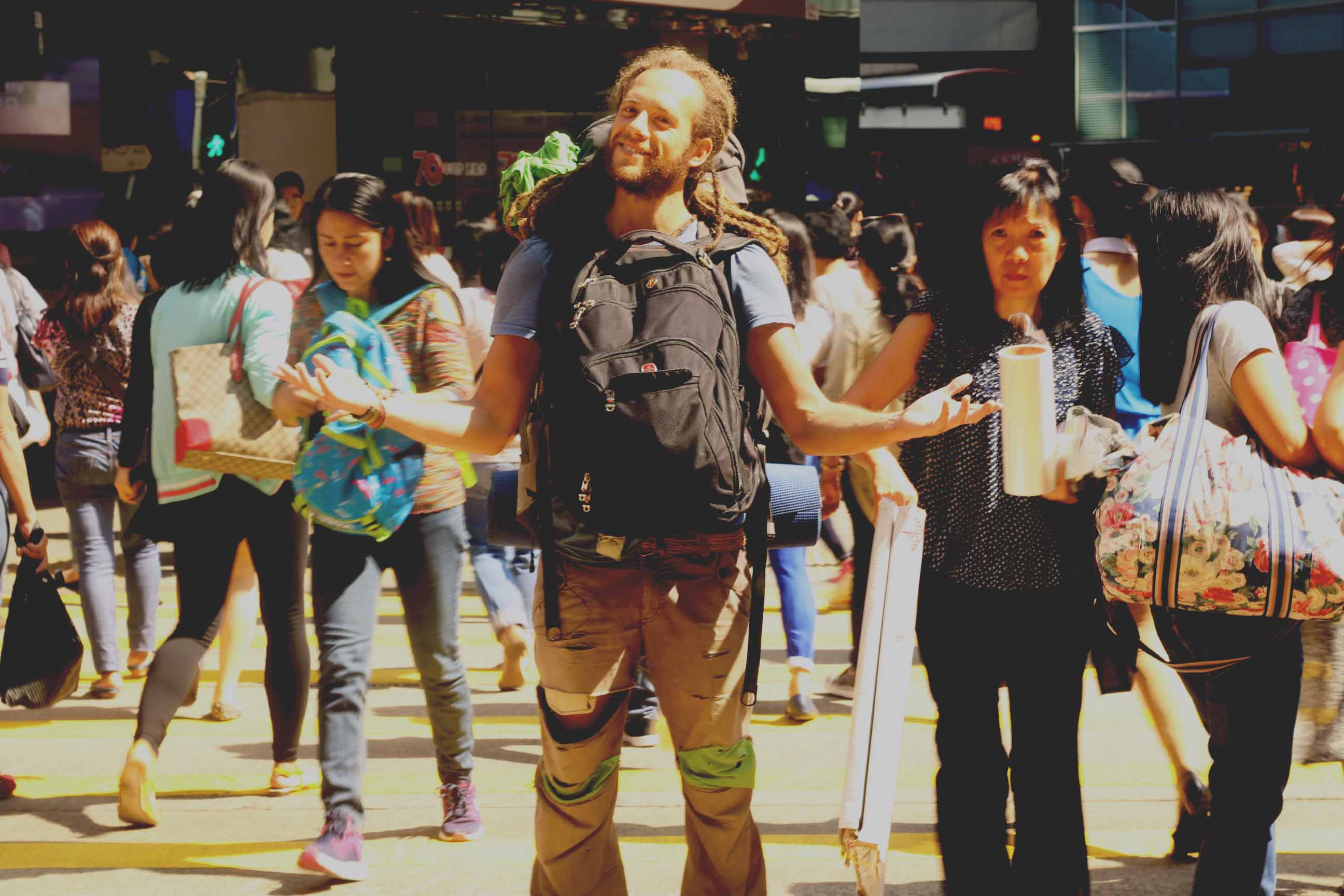 This was my submission for my feature writing class in Nov 2017 focusing on a number of backpackers that I had met over the years.

HONG KONG—Adi Liron saw the Northern Lights every night for five days in Lapland, an experience for which people normally pay hundreds of dollars. He saw them for free because he was staying in a room with a girl he matched with on Tinder.

“You get to cook and you have a place to stay with the added bonus of the sex – I call it Tinder surfing,” he said.

Adi rarely spends money as he hitchhikes and stays in the homes of strangers. His bank balance, he says, hovers around US$500 but he has already visited 43 countries. He left Israel most recently in June 2015 and his friends and family speak to him in mixed tones of admiration and exasperation.

Adi’s backpack contains just a sleeping bag, a sleeping mat, a little pillow, a few clothes, a food bag, footwear, a first aid kit, a phone charger, toiletries, cooking equipment, a passport, a smaller backpack, some money, walking sticks, a book to read and a book to write in.

A minimalist who has showered at gas stations spraying water through an upturned bottle with a pierced cork acting as a showerhead, he is also a vegan.

He does not want to stop travelling. At 31, he genuinely thinks he can travel for many years and he is not alone.

As internet penetration grew across the world this decade, the sharing economy was born. Everything began to be shared – cars, workspaces and even dresses. AirBnB, an online marketplace for lodging, grew from just three million stays in 2011 to 80 million in 2015. The company claims a majority of its users are individuals – a study in Amsterdam last year found that 86% of hosts shared the homes they lived in.

The internet has also helped many other non-commercial projects grow. CouchSurfing, a community platorm that is a non-commercial AirBnB equivalent, is one of many portals people use if they are ready to share their homes with travellers. Facebook groups, Whatsapp groups and other social media networks abound where travellers like Adi build a personal brand advertising their travels.

The currency of exchange is companionship and long-term travellers have been in demand. These low budget travellers seem to have passports that give them easy access to a bevy of countries with savings in currencies with higher purchasing power; resourceful and charismatic, some have troubled pasts or misanthropic traits.

I have met many over the years.

They are glued to their phone constantly finalising plans for their next temporary home yet a ready smile and a cheery demeanour with enough tales to last a car journey helps them hitch a free ride wherever they go and they get treated to a variety of experiences that would otherwise be hard to obtain for free.

“Very weird, very eccentric and like an old punk boy” is how Adi describes Oleg Lapenko, a liquor baron in a small Russian town who took a liking to his dreadlocks. Alongside two other girls, the Russian flew them across the country to Kamchatka and they saw glaciers and canyons from a helicopter.

The son of a father who works in construction in Rishon LeZion in Israel, Adi, in a former life, was a security guard. He has now hitchhiked across the United States, Europe and South America. Most recently, he worked at a factory manufacturing tricycles in China.

In faraway Dijon in France, Sonia, on the other hand, says she has found peace. She did not want to give out her last name.

A Pole from Gdansk, Sonia was at the home of two retired French teachers and is now rebuilding her life. Her boyfriend, the chef and the owner at the Italian restaurant she worked at in Australia, gave her an hour to pack after their last argument. She then travelled for four weeks in her car in tears and decided to go back to France in July.

“The weather is very beautiful because all the leaves are golden and the sun is really warm and when I was drinking my coffee, I looked outside and it felt like God was smiling at me through the leaves,” she said in a phone interview.

Sonia has hitchhiked, backpacked and couchsurfed in 73 countries and has tales of unexpected turns of kindness from strangers who offered their homes and their kitchens. She calls it travelling ‘professionally’ and began the hobby eight years ago. It would have been more difficult before the internet.

“Without the Internet, it is less convenient,” admitted Adi. “You can sleep on the street corner or shower in restrooms, create a little commune and build yourself a kitchen but it’s not the same.”

Both Sonia and Adi have a strong desire to see the world following a wanderlust that is part of a storied tradition – Sufis or wandering dervishes in the Middle East, freight-hoppers in the United States, sadhus or holymen in India and perhaps even the colonial adventurers of old discovered distant lands for themselves in this fashion living a nomadic lifestyle not really caring about the usual concerns of a careerist.

People like Adi and Sonia who I have met over the years also dislike the rigmarole of a life build around the workday.

“I was sick of working like a slave and I wanted an adventure,” Sonia stated. “I wanted to be like an Indiana Jones in a skirt.”

Living off the benevolence of others, however, often causes strain. Constrained by their budgets, such long-term travellers are seen as freeloaders.

Darrell Johnson is 57 and lives in Montreal. He is among the many people that host such travelers that I contacted; he is also a psychologist and says he has seen two different types among the long-term travelers who have stayed at his home over the years.

“I might call one group ‘compassionate children of the world’,” he said. “They resemble a blend of hippies from the 1960s, Peace Corps workers from the 1970s and the social justice warriors in the previous decade.”

“They like people, are adventurous, and value experience above ownership.”

“[Some of them are] ‘entitled children of the world’. One young man mentioned how well people had ‘taken care’ of him and met his needs and was charming, talkative, and entitled.”

Elvis Lam, a guesthouse manager in Guilin and a frequent long-term traveler on his own, does not think such backpackers pose a threat to the tourism industry in developing countries which are often where they flock to. But he does feel such travellers take advantage of the people they meet.

“I know people are good to hitchhikers and outsiders in China even if they are not very rich,” he said.

Meanwhile, Adi just strongly feels that he is on a personal mission to see the world. He spends most of the time on his travels hiking and not necessarily staying at people’s homes.

“I know that for most people, this is like a fantasy,” he said while we were talking on the rooftop of a four-storey building admiring the skyscrapers that seemed to touch the roof of the world in Central in Hong Kong.

“You should strive to make your dreams a reality but all these people telling me they want to see the world are not doing anything.”

It does get lonely on the road, Adi admitted late into the conversation. With each passing day, the distance, both physically and emotionally, gets wider with friends and family. Adi also feels that time may eventually run out on his trip.

“That thought scares me like what if I get cancer but I can’t live life by it,” he said.

As he walked with an easy swagger along the streets of the central business district, many eyes in the crowd darted towards him. In any other era, his tearing pants and fading shirt might mark him out as a delinquent.

With a smartphone, an internet connection and the widespread cultural acceptance of long-term travelers, he evokes a different image now.

“Being homeless by choice is not so hard anymore,” he said as he continued his journey for the 892nd day.